The NAACP San Diego Branch held its election on November 12th via ElectionBuddy.  It went reasonably smoothly; 277 members voted, and approximately 30 of those called in to the Election Supervisory Committee for assistance.  Three errors were discovered in the membership roster, but those folks were enabled to vote through the quick thinking of the Election Supervisory Committee.

For comparison, fewer than 30 people voted in the 2018 Branch Election.

You may view the results of 275 voters by following the same link you were sent to do your voting.  However, because accommodations had to be made for two of the membership errors, the online vote differs just slightly from the numbers below.  These additional votes did not affect the outcome.

We congratulate the winners and thank all the candidates for their service and their efforts.  We look forward to working with everyone to move the needle for Civil Rights in San Diego and beyond.

All our voting will be done via the online voting service ElectionBuddy, as recommended by the National Association.

Three Ways to Get Your Ballot

We will be sending out ballots from 4-9pm on November 12th, 2020. You can get your ballot three different ways:

If you have an email on file with us, we will email you a link to your ballot.

If you have a mobile phone on file with us, we will text you a link to your ballot.

If you don’t receive your ballot by email or text, join the following Zoom call for help voting:

Once you get your ballot and get logged into ElectionBuddy, voting is easy. Simply click the circle or box next to the candidate(s) you wish to vote for. If you don’t wish to vote for any candidate for a particular office, click “Abstain”. 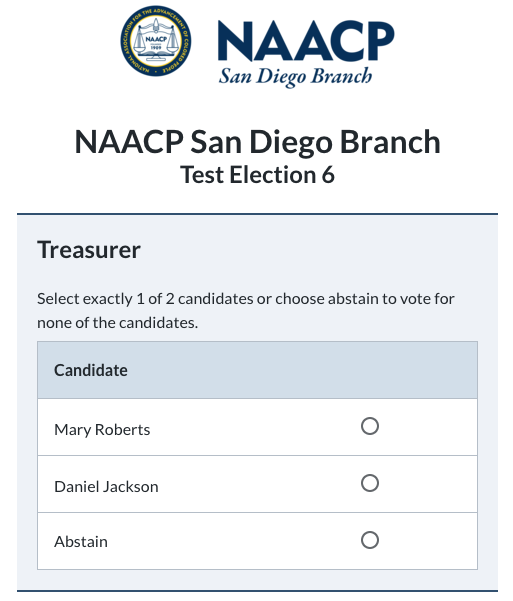 Keep scrolling down, because there are a lot of folks you might vote for! When you are done voting, click “Verify your selection” 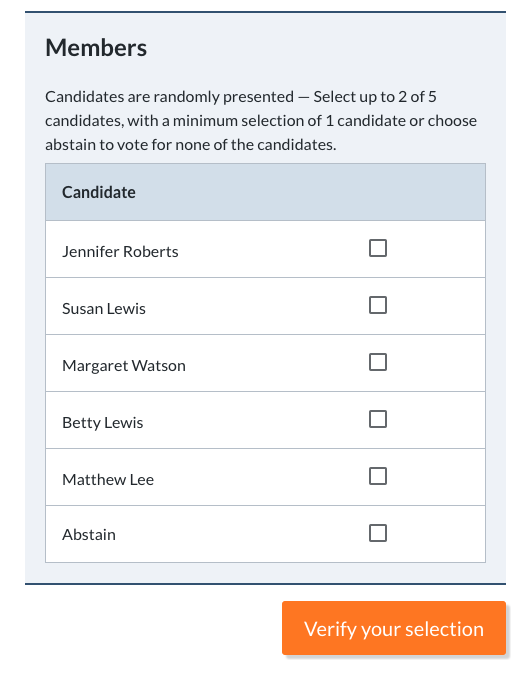 ElectionBuddy will remind you who you voted for, and you can either go back and make changes (“Edit Ballot”) or make your vote final (“Submit ballot”). 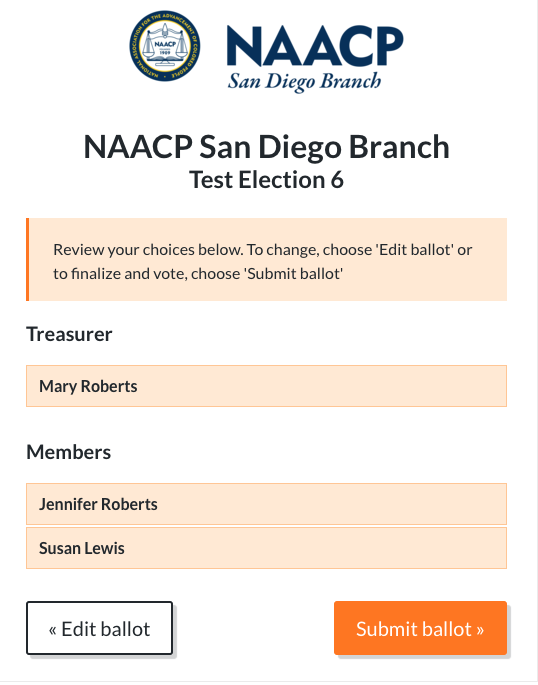 You will only be allowed to vote once, so be sure before you hit “Submit ballot”!

You will be given a verification code; make sure you copy that down! 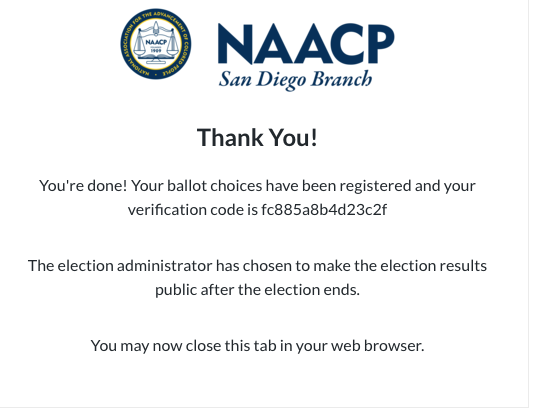 At our October 1st General Membership Meeting, we have four matters of election business:

At the September 3rd General Membership Meeting we elected the following persons to the Nominating Committee:

These folks were charged with coming up for a nominee for each of our six (or seven) Officers and ten At-Large Executive Committee Members.  They will give their report at our October meeting and present their list of candidates.  If you would like to be interviewed by the nominating committee for a position on their slate, please email secretary@sandiegonaacp.org.  The Nominating Committee requests responses by September 18th.

Also at the October 1st General Membership Meeting, we will accept nominations by petition.  In order for a nomination by petition to be valid, it must be signed by the nominee (granting consent for the nomination) and by at least three other members in good standing.

You may download a Petition and Consent form here.  The form should be signed by all parties and emailed to secretary@sandiegonaacp.org, or mailed to the Branch at:

Please realize that the form MUST reach the Branch by October 1st to be considered.  Postmarks are insufficient; we MUST receive it.

For email, we will accept scanned copies or copies signed via AdobeSign or DocuSign or similar.

We greatly encourage you to submit your nominating petitions sooner rather than later.  We will validate them and let you know if there is anything that needs to be fixed.  There is no margin for error at the October 1st meeting.  Your petition will be validated during the meeting, and if it is found invalid you only have until the nominations close during the meeting to resubmit it.

We have written a lengthy post listing what the various official documents (which can all be found at sandiegonaacp.org/election) say.  It boils down to this:

In order to run as a candidate you must:

In order to sign a nominating petition you must:

How Do I Know If I’m Eligible?

The best thing to do is email secretary@sandiegonaacp.org and ask.

However, if you have your membership card, you can get some hints:

We say “probably” not eligible because there are some instances where there have been misunderstandings that can sometimes be fixed.  Please email secretary@sandiegonaacp.org and we will try to help.

Please remember that the Secretary will be required to validate all the nominees and petition signers during our October 1st General Membership Meeting!  Please do all our members a favor and submit your petitions early so we can validate them early and not make everyone wait.  As an added bonus, that will mean there is no chance of a misunderstanding and an invalid nominating petition.

The moral of the story: email secretary@sandiegonaacp.org and ask!

We are going to use online election software.  Two choices will be presented, and we will ask the membership to choose which they prefer. We have evaluated four packages:

Of these four packages, we believe OpaVote and ElectionRunner are not viable, due to security (ElectionRunner) and the de-selection of earlier votes and lack of voter receipts (OpaVote). ElectionBuddy and SimplyVoting are both acceptable and will be offered as choices at the meeting, but at around a quarter of the cost (which will add up if we have both a practice election and a runoff), we recommend ElectionBuddy be chosen.

If you are interested in learning more about how an ElectionBuddy Election might work, we refer you to the following presentation:

Please be aware that this is very much a work in progress!

4. Election of the Election Supervisory Committee

The Election Supervisory Committee are the folks who will actually work out the nuts and bolts of the election.  They may not be candidates for office or the Executive Committee.  Please consider that the election is a lot of work they will be required to do; they should have both the skills and time to manage an operation like this.

In order to stand as a candidate for the Election Supervisory Committee, you have to have been a member of our Branch since September 1st, 2020 and live or work in our jurisdiction.

The next steps in our election take place at the September General Membership Meeting. We need to do three things at that meeting: Elect the Nominating Committee, decide how many Members-at-Large there should be on the Executive Committee, and choose the method of the election.

The Nominating Committee consists of 5-15 members, only 2 of which may be current Officers or Executive Committee members. In order to serve on the Nominating Committee, you must have been a member in good standing of the NAACP San Diego Branch for the entire time period of August 4th, 2020 through September 3rd, 2020.

The work of the nominating committee will be to produce a “slate;” persons recommended for each Branch Office and each at-large position on the Executive Committee.

Due to COVID-19, the Board of the NAACP has decided that all elections should take place online. We postponed choosing the election method hoping they would give us recommendations by the promised September 8th date; they did not.

Stage 2: When and Where?

At our August General Membership Meeting, the Membership will decided to hold the election on November 12th, from 4pm – 9pm. Due to COVID-19, elections will not be done in person but will take place through an online voting system.

In order to run for election in November of 2020, you must be a member in good standing as of May 1st(1), with your membership dues paid up.  If you have even a single day of lapsed membership from May 1st to the election in November, you will be ineligible to run.  We have seen this happen in our very Branch in the past, and the Secretary wishes to ensure it never happens again.

Note: it is currently impossible to renew your membership in our Branch from National’s website.

Not a member?  Need to renew?

Visit join.sandiegonaacp.org or mail your check by October 12th to:

To be eligible to vote in our Branch, you must live or work in our “jurisdiction,” which is San Diego County south of the 56 freeway. Members in good standing will by now have received an email if their address of record is not in our jurisdiction. If you have moved or if you work south of the 56, please email secretary@sandiegonaacp.org

Note 1:  Those of you who study the bylaws on a daily basis (we assume that is all of you) may have read that the membership deadline is April 1st. That deadline has been moved, for this year only, by the National Board of Directors.