The NAACP San Diego Branch is shocked and appalled by the recent LA Times news report of the “taser award” pictured here: 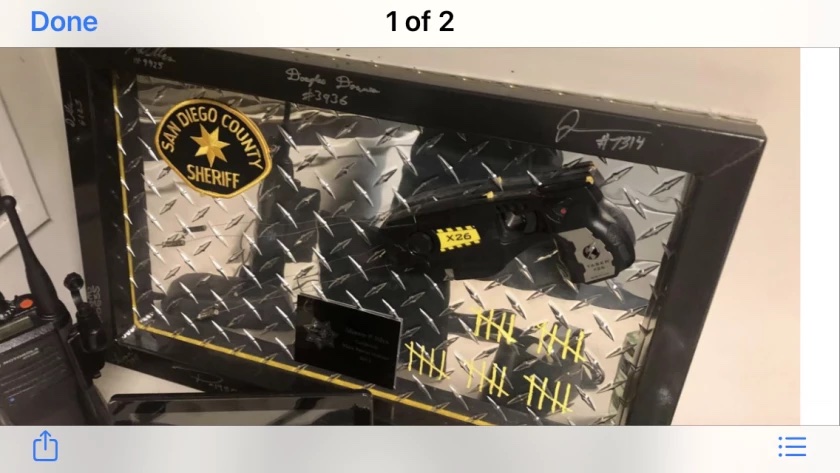 According to news accounts, this “award” was awarded to Sergeant Shawn Silva in 2012 at the San Diego County Sheriff’s department after he had fired his taser 25 times, but was now shown to the world as of late 2019.

From media reports, the Sheriff’s Department has responded that the plaque has been removed and that this was not an official award–Sheriff’s department was disappointed that this “could be interpreted” and glorifying the tasing of “individuals.” But let’s be clear:  “Individuals” are not being tased; human beings are.  And the human beings who are tased die from the experience.

Two clear examples are the Texas man mentioned in this report, who died after being tased four times and Mr. Tony Wilson from San Diego County.

That is the human cost of tasing.  It is not something for humor or celebration.

“It [the plaque] was displayed in Silva’s office for years, visible to deputies as well as to lieutenants and captains visiting Silva’s office.”  (LA Times)

If this is true, then the human cost of tasing has been conformed to a trophy competition amongst the officers in Silva’s office.

Law enforcement agencies like to claim that excessive force is rare, and limited to “problem” officers.  Yet here we have an “award” that seems to have been tolerated by a large number of officers over a long period of time–seven years to be exact when this photo surfaced. This plaque speaks to a culture of callousness toward civilian suffering.

Some agencies support good policy changes and speak often about their goal  to reduce the degree to which they terrorize the populace.  Even when we believe the good faith of the leaders of these agencies, too much of the culture of law enforcement makes a mockery of such good intentions.

Until the culture of law enforcement changes, too many civilians will continue to die at the hands of the police.  We’re tired of talk; we want to see bold action.