Re: Have We Learned Nothing About Excessive Force? 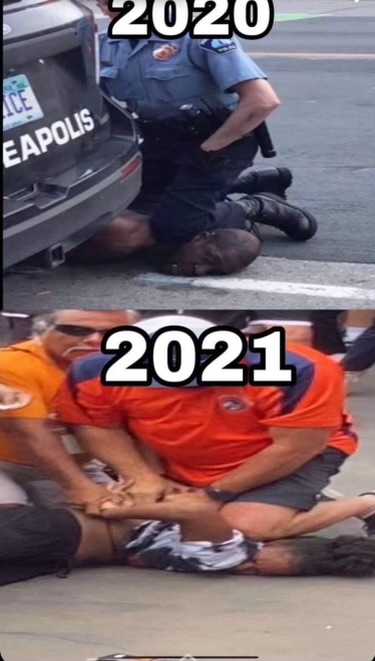 Have we as a society learned nothing about excessive force?  Are we still, after all this time, willing to allow reckless and dangerous amounts of force to be used by “peace” officers?  Are we really ok with this level of force being used against children?

We found this picture on social media.  We think it sums up the lack of change in our society, despite all the pledges and promises that were made in the wake of Mr George Floyd’s murder.

She continued to struggle because a White man was aggressively trying to restrain her. Struggling for release is a perfectly normal, natural and healthy instinct, and we do not blame her for this.  Why did he have to continue with his efforts to assert his control?  She did not have a weapon (neither girl did), and neither girl was in conflict with other students. In fact, the excessive force used caused the students looking to get agitated, making his continued effort at total domination a cause of danger, not safety.

This man is a retired member of the Sheriff’s Department and it makes us all the the more upset to see a White  man associated with Law Enforcement abusing a Black woman. There have been plenty of fights (among white kids) on this campus and this kind of force is not used.

The video from the school is obstructed by trees. The video from students has a better view. He claims he had her on her side but in the heat of his frustration he pushed her on the her stomach and used his knee. We are unclear why his “frustration” justified the use of a tactic we know to be lethal.  This girl weighs some 105 pounds, is 14 years old, and it was her first day on campus.  The other young lady attacked her first. She is a student from a group home, is on an IEP, and is BLACK.

It is long past time for something to be done.  No more insincere statements, no more lip service, no more “training” without follow-through.  There need to be CONSEQUENCES for violent racist behavior from people under color of authority.  When school districts like Grossmont or San Diego Unified aren’t willing to clean house themselves, there are avenues at the State and Federal level to force them to do so, and we will be pursuing those. Share: Have We Learned Nothing About Excessive Force?
Zoom Link